If the track FITs

Most careers don’t really take off when a bushman laughs at you, but that’s sort of how it happened for Drs. Sky Alibhai and Zoe Jewell. They were in the far-flung regions of Zimbabwe tracking black rhinos. The rhinos had been fitted with radio collars, and Alibhai and Jewell were monitoring them by listening for the beeps while they walked along.

The indigenous people – the bushmen – who were helping them laughed and asked, “Why are you looking up? You should be looking down.”

They did, and the footprint they saw became the foundation of a new conservation approach – one that combines computational analytics with centuries-old wisdom. And since, Alibhai and Jewell established WildTrack, a not-for-profit conservation organization dedicated to the noninvasive, cost-effective monitoring of endangered species.

When working with the bushmen in the 1990s, the husband-and-wife conservation team learned that much could be understood about individual animals by the prints left behind. They could determine sex, for example, and age. And they could distinguish one individual from other animals of the same species. The animal didn’t have to be disturbed, immobilized, collared, notched, or harmed in any way.

At the same time the couple began embracing the idea of census through footprints, they learned of problems associated with an established census practice. A close analysis of the black rhino data they collected revealed that part of the conservation process – the immobilization – was actually interfering with the females’ fertility. “We looked at the data and said, ‘This is crazy,’” Alibhai explains. “We’re trying to save this animal and we’re using a strategy which is counterproductive.”

From that point on, the couple became convinced that in order to be reliable and ethical, the data must be gathered in a way that doesn’t affect the animal. “Our ethos is noninvasive monitoring,” says Alibhai. “Good ethics in conservation equates to good science.” 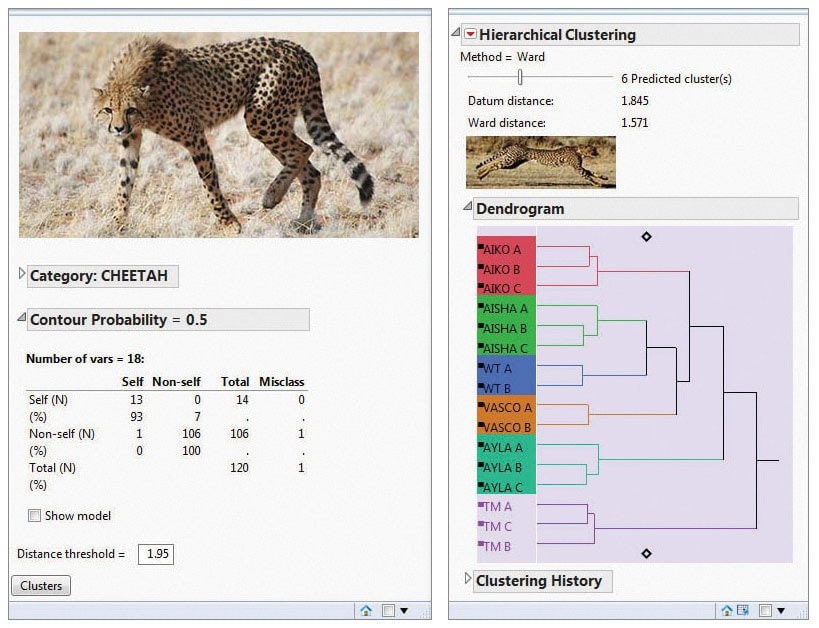 By clustering trails together, the analyst can identify individuals as well as siblings.

By clustering trails together, the analyst can identify individuals as well as siblings. 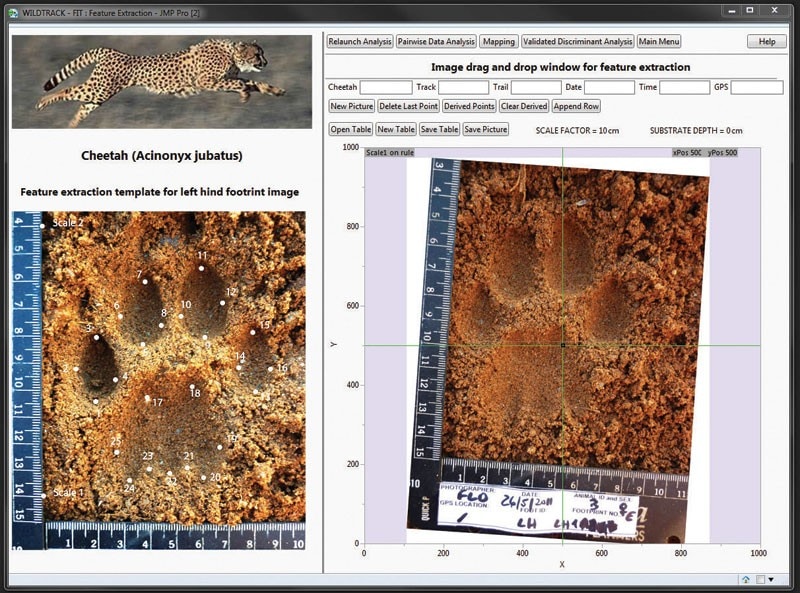 FIT is used to identify key landmark points in a cheetah footprint. This is the starting point for identifying an individual animal.

FIT is used to identify key landmark points in a cheetah footprint. This is the starting point for identifying an individual animal.

A FITting app of JMP®

Armed with a passion for conservation and lessons learned from the bushmen, Alibhai and Jewell turned to JMP statistical discovery software from SAS. Today, the team uses an analytic application built in JMP that they call “FIT” for Footprint Identification Technique.

Here’s how WildTrack’s FIT works: Digital images of individual footprints are collected in the field and uploaded into JMP. Each image is of an animal print in sand, mud, snow or other natural substrate. The challenge then is defining it, extracting it from a background that is exactly the same as the footprint itself. JMP makes this possible. In a graphics window, the team creates a series of landmark points – sort of an outline – on the image. JMP fills in the rest and populates the image with points converting the visual into numbers. And numbers, for a scientist, tell the story.

The result is a unique identifier, similar to a human fingerprint, for each individual animal. Coupled with a GPS overlay, the team can put together an incredibly accurate census for specific animals in specific regions. 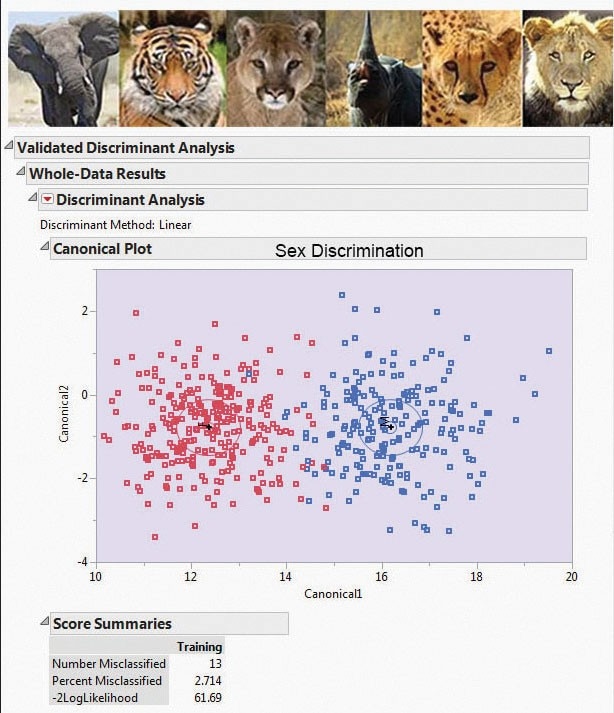 Discriminant analysis identifies the number of males and females.

Discriminant analysis identifies the number of males and females.

Where does JMP end and the FIT application begin? To empower scientists to use JMP in this specific way, Alibhai and Jewell partnered with SAS developers who specialize in JMP. “We’ve actually built a superstructure – including image processing, data analytics, and mapping – around JMP software to make it more user-friendly,” Jewell explains. Like many JMP users, Jewell recognized a need to customize JMP so that the process would be repeatable. FIT satisfies that need for the wildlife biologists and other conservationists. “Other people around the world can use it too.”

And many conservationists – and animals – have benefited from this 15-year collaboration between WildTrack and SAS. Alibhai and Jewell have used the technique and software extensively – traveling to the Arctic to census polar bears; to Zimbabwe and Namibia for work with black and white rhinos and cheetahs. They have tracked Amur tigers in China, Bengal tigers in Nepal, and mountain lions in Texas. Working in Central and South America, they documented the tapir before traveling to Spain and Portugal to study the Iberian lynx.

They have worked with organizations as far reaching as WWF and National Geographic. And, in January 2014, at the behest of the Chinese government, the plan is to travel to the Sichuan Province to begin a project with the beloved giant pandas.

Jewell says their work is so important because it gets to the heart of all conservation projects, no matter which animal is at risk. “You have to ask ‘How many are there, and where are they?’ The answers form the foundation of solid conservation strategies. That’s why we needed JMP.”

Knowledge empowers action, says Jewell. “Right now in a village in Kenya, JMP is protecting lions from the possibility of retribution killings,” she explains. “A student from the Nicholas School of the Environment at Duke University (Durham, NC) is there collecting footprints in the hopes of identifying the lion (or lions) responsible for killing villagers’ cattle at night. If a rogue lion can be identified and relocated, not only will it keep the cattle safe but it will prevent the villagers from possibly killing an entire pride in order to stop just one.”

Conservation decisions large and small can be made based on real data. “Around the world, we work with decision makers in environmental and conservation sciences to implement effective policies,” says Jewell.

Alibhai says FIT represents a life’s work, a dream for them. He says: “We are conservation biologists: That’s our interest, that’s our motivation, that’s what gets us up in the morning.”