Scientists at the US Department of Energy’s National Renewable Energy Laboratory (NREL) in Golden, CO, aim to optimize the use of solar energy, and JMP® statistical discovery software from SAS helps them hit the mark.

There’s a tremendous amount of information available for this research – scads of data from hundreds of variously manufactured and maintained solar energy systems deployed in a range of climates on vastly different terrains. The task is to harness that data to better understand how well these systems operate.

That task falls to NREL Senior Reliability Engineer Dirk Jordan and his colleagues. Their job is to delve into all this data and deliver it to the manufacturers of solar energy systems, offering insight into how well those systems perform today and how they might perform more efficiently in the future.

The ultimate objective is to establish an international compliance standard for all such systems. 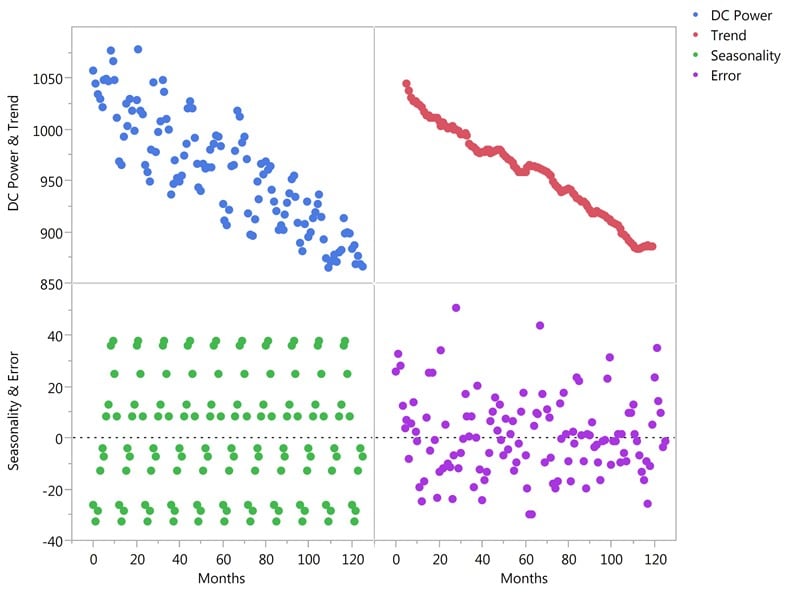 Long-term PV system performance is composed of a trend, a seasonal component and a residual error. Uncertainty of degradation rates can be significantly improved by using the trend component only. 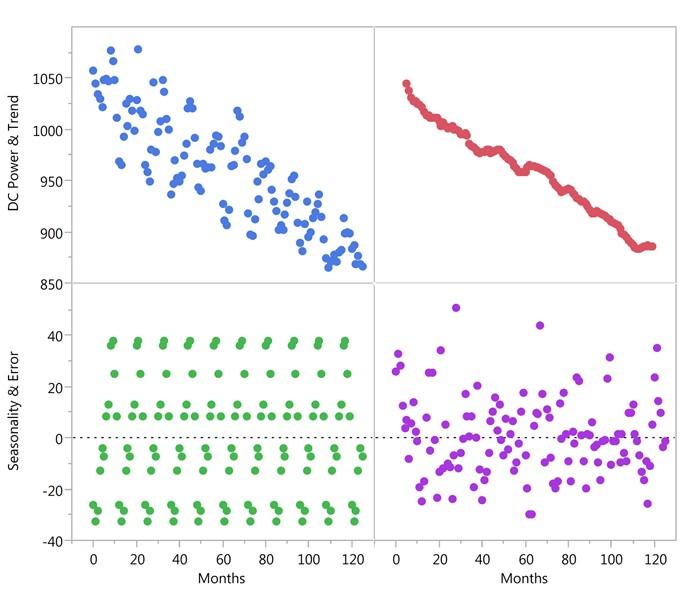 Long-term PV system performance is composed of a trend, a seasonal component and a residual error. Uncertainty of degradation rates can be significantly improved by using the trend component only.

Solar production is on the rise in the US. According to the Solar Energy Industries Association’s Solar Market Insight Report in late 2013, more residential photovoltaic systems were installed in the third quarter of that year than in any prior calendar quarter.

“Even more importantly,” the report’s authors wrote, “2013 is likely to be the first time in more than 15 years that the US installs more solar capacity than world leader Germany.”

NREL develops renewable energy technologies and encourages innovation to address the nation’s energy and environmental goals. The lab researches photovoltaic materials and devices (which convert sunlight to electricity), bioenergy (derived from biological sources, including wood, straw and manure) and wind technology, to name a few.

Jordan is with NREL’s photovoltaic reliability group. His interest is in how these systems perform over the long term in different outdoor environments. NREL has data on systems that have been in the field for more than two decades and are still producing energy, though at an ever-diminishing rate.

Systems generally decline in performance at a rate of about 0.5 percent a year, though the rate will vary depending on climate, the size of the system, how it was manufactured and a variety of other factors.

An accurate reading of the degradation rate of a photovoltaic system is important. Predictions of these rates help establish power-purchasing agreements (the expectation of a given number of kilowatt hours to be delivered each year) and warranty terms. And, obviously, if a system’s output is declining more rapidly than expected, something needs to be done.

In what is a $77 billion global industry, minute variations from the norm add up to a great deal of money.

Jordan, a physicist by training, had little statistical background when he began using JMP statistical discovery software from SAS some 10 years ago. Today, he uses it quite extensively. JMP Scripting Language (JSL) and the software’s versatile data mining capabilities have been useful in his research into extremely large, richly nuanced data sets.

Jordan was called upon to research the degradation rates of photovoltaic systems. The results of that research will be used to help develop a standard sanctioned by the International Electrotechnical Commission. This standard will define how to filter data and calculate degradation rates in an accurate and reproducible way.

His first step was to gather available data to use as a baseline. He then collected new data and began to mine it.

An average annual rate of degradation of 0.5 percent is a very subtle decline with significant financial repercussions. JMP time-series analysis came in handy in examining the many and varied factors contributing to that decline.

“Laid over this very gradual decline are daily cycles – the sun comes up, the sun goes down – and so you see your system go from minimal to maximal performance each day,” Jordan explains.

Demonstration of the impact of data filtering on degradation rates for a single data set.

Demonstration of the impact of data filtering on degradation rates for a single data set.

“Then you have the seasonal components – for example, the water-vapor content in the atmosphere. That changes with the seasons.

“We’re interested in this really tiny rate at which these systems are degrading,” he says, “and to detect this, with all these variables, is very challenging. “Time-series modeling has really helped with this.”

A week’s work in 10 minutes

Jordan says that given so many variables, data on a single solar energy system can be analyzed a couple of thousand different ways.

“It would have taken, probably, weeks, if not months, if I’d had to do it all manually,” he says. “But with an automated process, it ran in a few hours.”

Each quarter, Jordan sent out 10 to 15 reports on his findings to companies in the industry. Using JMP, he incorporated time-series modeling – for example, ARIMA models, which predict future values of a time series – into those reports.

He says that it used to take him up to two weeks to complete all of the reports. Now, they are generated overnight. When he arrives in the mornings, he puts them into Word documents, does a bit of touch-up editing, and they’re ready to go.

“I went from at least a week of work to maybe 10 minutes,” Jordan says. “It was pretty considerable.”

Jordan is now working on a project that addresses a subject of much debate among solar energy professionals: reliability. “There have been articles circulating that have generated some angst about the reliability of photovoltaic systems,” he says. “But when you read them, you see that they’re mostly based on opinions, not on actual field performance data.” 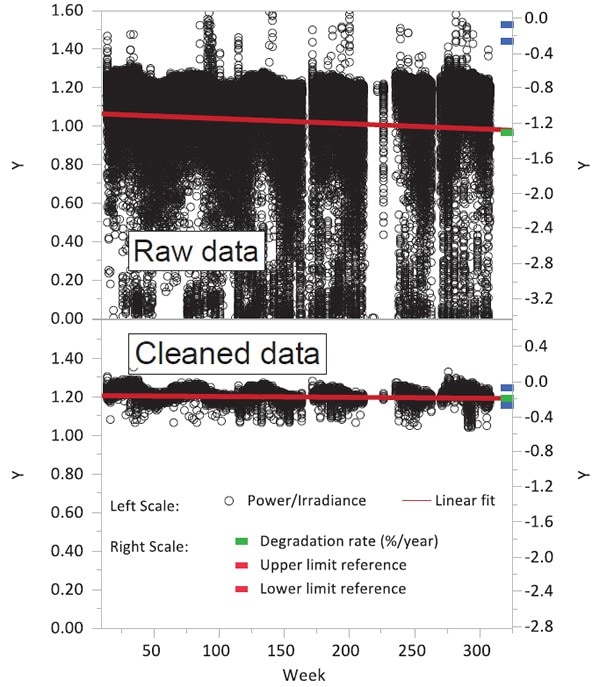 Illustration of the difficulties of determining long-term photovoltaic performance. Shown is the power over irradiance (light intensity) ratio for a system fielded for about six years. The determined degradation rate is shown on the right axis by a green bar, the window determined by a reference in blue. The cleaned data (bottom) determines the degradation rate accurately in contrast to the raw data (top). 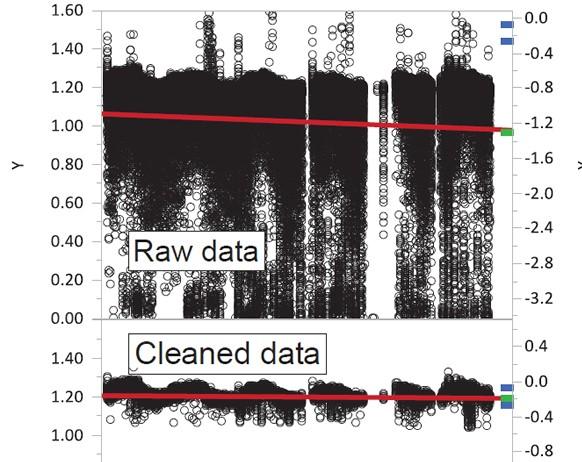 Illustration of the difficulties of determining long-term photovoltaic performance. Shown is the power over irradiance (light intensity) ratio for a system fielded for about six years. The determined degradation rate is shown on the right axis by a green bar, the window determined by a reference in blue. The cleaned data (bottom) determines the degradation rate accurately in contrast to the raw data (top).

Jordan’s initial findings indicate that approximately 90 percent of systems perform as expected. He and his colleagues will publish the results of their study in industry and financial publications and present them at a variety of forums.

The ability to mine so deeply into his data has led Jordan to a greater appreciation of the fact that even very subtle disturbances can have significant effects on photovoltaic systems.

He’s learned, for example, that outliers might be the result of panels being even partially covered by snow, a maintenance crew member inadvertently shading panels, or birds nesting on them. Such events add to the data “noise” that needs to be eliminated to more accurately read performance.

Jordan’s also learned that seasonal variables such as the angle and spectrum of the sun can significantly affect long-term field performance. The use of metrics that factor in these considerations will produce more accurate data.

As Jordan shares his findings with the industry, along with recommendations that can lead to improved reliability of solar energy systems, his work may help bring about a future of cleaner energy – good news for us all.

I went from at least a week of work to maybe 10 minutes. It was pretty considerable.