Advancing science literacy one algorithm at a time

For many school-age children today, science fair projects are not only a rite of passage; they’re also the most engaging and memorable part of their education. But for every successful experience, there’s a student who doesn’t find an interesting project, or a project that goes awry, or an activity that doesn’t actually convey much useful knowledge. And for Kenneth Hess, that’s unacceptable.

“When my daughter was in middle school, she always seemed to learn a lot from her science projects,” Hess recalls. “But when I wandered around the science fair, I’d see lots of projects that weren’t teaching much of anything. And it struck me that it would be really valuable to provide kids with the resources to help them learn as much from their science projects as possible.”

A successful engineer and entrepreneur, Hess created the popular Family Tree Maker genealogical software in 1989 – and sold the $23 million company behind it, Banner Blue Software, in 1995. Shortly thereafter, Hess decided to commit his time and knowledge to pursuing science literacy full time.

In 2001, Hess founded Science Buddies, a nonprofit designed to help K-12 students, parents and teachers identify and complete interesting, informative science projects. But to make the resource truly valuable, Hess would need a way to help each student quickly and accurately home in on the perfect project – one that inspired them and spoke to their interests. And for that, he’d need JMP.

Every year, 10 million North American students in kindergarten through 12th grade must complete a science project. But they don’t all have the guidance and resources to select an edifying project and make it a success. Science Buddies aims to bridge this gap by helping students build their literacy in science and technology. Its award-winning website empowers students, parents and teachers to quickly and easily find free project ideas in all areas of science, from food to physics, from microbiology to music.

Science Buddies has assembled personalized learning tools, more than 15,000 pages of scientist-developed subject matter and an online community of science professionals who advise students on a volunteer basis. It also provides resources to support parents and teachers as they guide students doing hands-on projects. Virtually all of its 1,200 project ideas are designed by professional scientists and convey concepts found in the latest academic research.

On an average school day, 80,000 users visit the Science Buddies website to take advantage of these resources. But Science Buddies has discovered that the most challenging aspect of student science projects isn’t formulating a hypothesis, designing an experiment or analyzing data. Instead, the most difficult step is selecting the right project in the first place. Hess quickly realized he’d have to invest time and imagination in addressing that need.

“The graphical capabilities in JMP let us take nearly 1TB of data and spin it around and see what’s going on. And the performance is unbelievably good.”

A year after launching Science Buddies, Hess and his team introduced the Topic Selection Wizard, an online, model-based project recommender. Since then, more than 10 million students have benefited from increasingly sophisticated versions.

The wizard walks students through 26 questions about their science interests, such as, “Is math your favorite subject at school?” Users can respond “yes,” “sometimes” or “no.” Based on that input, the tool returns recommendations for science projects. Users can further refine the results based on difficultly level and length of time required.

Suggested projects could range from “Using Daphnia to Monitor Water Toxicity” to “Linear vs. Logarithmic Changes: What Works Best for Human Senses?” to “Creating a Kidney: How Stem Cells Might Be Used to Bioengineer a Vital Organ.” Each project idea typically provides a brief introduction, expected time requirement and cost, a list of needed materials and equipment, a list of key terms and an experimental procedure.

“We have projects that let students use data from a NASA satellite or online genomics data,” Hess notes. “We even have resources for students who are more interested in art than science. One of our principles is that if kids are more engaged, they'll learn more.”

The Topic Selection Wizard uses separate phases for model building and prediction. The model-building component looks at historical wizard usage to record vectors comprising user actions and subsequent choices. It also tracks whether a user expresses an interest in any of the 1,200 project ideas by creating a “satisfaction event,” such as printing out project materials.

For each project idea, the wizard periodically tabulates vectors comprising about 1.5 million user responses. It builds a historical record as a matrix that shows the probability of creating a satisfaction event for a specific project while answering each question in a particular way. Because there are 26 questions with three values each, there are 326 possible combinations of answers, or 2,541,865,828,329 states of the system, Hess says.

Hess has developed visualizations that enable him to validate the wizard model. The history of each project idea, or “symbol,” is defined by 78 probabilities, representing the three possible answers for each of the 26 questions. Because it’s not easy to visualize 78 dimensions, the Science Buddies team applied Sammon mapping, an algorithm that preserves the structure of inter-point distances in high-dimensional space, to reduce the 78 dimensions to three. That allows them to plot the project-idea symbols in an easily perceivable space. “Excel has very limited visualization possibilities, especially when you start getting into multiple dimensions, so that's where JMP comes into play,” Hess says.

Sammon mapping of the 1,200 project ideas, color-coded by 32 areas of science, allows Science Buddies to use a 3D scatter plot to visualize the history of wizard interactions. Symbols with similar histories appear close together, and symbols with dissimilar histories are far apart. Bubble sizes scale with the popularity of the symbol in the historical record. “We take our 78 dimensions and reduce it down to three as an approximation,” says Hess, “and feed that into JMP, where I can do a 3D scatter plot, rotate it around and change the colors. JMP is an invaluable tool to see what's actually going on as we do our development work.

“When I do this kind of design and development work, proving things out for a sophisticated piece of software, I think visually. JMP has always been an important part of that visualization. The graphical capabilities in JMP let us take nearly 1TB of data and spin it around and see what’s going on. And the performance is unbelievably good.”

Science Buddies’ visualization efforts enable it to continually fine-tune the science projects in its database. “We monitor which areas of science receive the most interest, develop new project ideas in areas with the most traffic, and broaden the scope of scientific concepts covered,” Hess says. 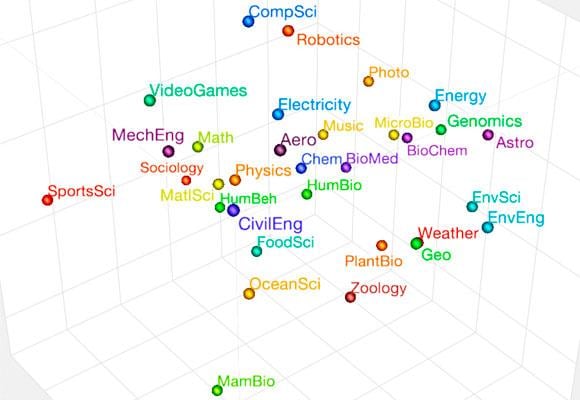 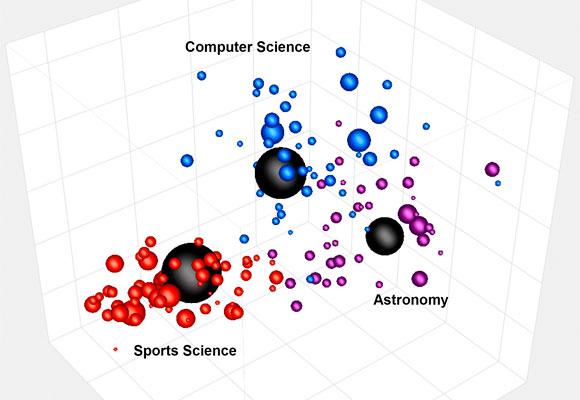 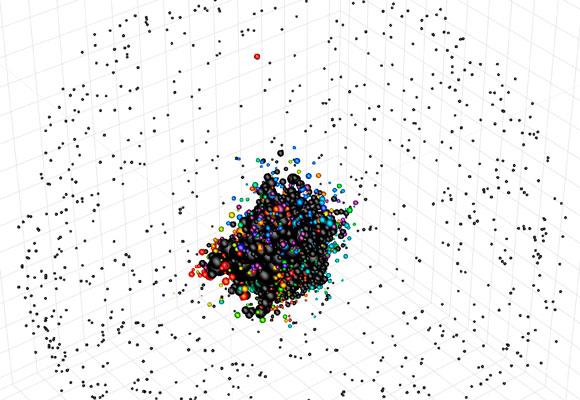 Hess also uses Sammon mapping to plot users in the knowledge space based on their responses to the science interest survey. 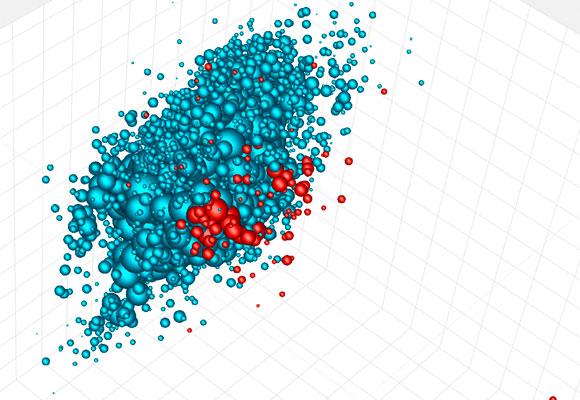 By isolating a single user, Hess can visually compare the highlights of the Topic Selectin Wizard’s top 97 recommendations with lower-ranking topics.

Setting students on a path to success

Today the Science Buddies website is accessed by millions of students around the world. The Topic Selection Wizard guides those students to projects that will engage them. “Students who use the wizard are 95 percent more likely to find a project idea that satisfies them compared to students who simply browse the projects,” Hess reports.

As a result, students pursue projects that are more likely to help them learn. “The idea started at science fairs where kids were doing projects that weren’t teaching them much of anything,” Hess recalls. “We’ve had a major impact on that over the years. You still see some projects like that, but far, far fewer. It’s much more likely that students are doing something that results in a good learning experience.”

That success is a positive return on Science Buddies’ investment in its core mission, which is “to help students from all walks of life build their literacy in science and technology so they can become productive and engaged citizens in the 21st century.”

JMP continues to be integral to those outcomes by helping Science Buddies understand its user data. “I thought our data contained a lot more than we were pulling out of it, and that turned out to be correct,” Hess says. “For example, by collecting data on how students answer the wizard questions and what projects they like, we’re learning about the science careers they’d be most interested in. And JMP is really accelerating that process.”