For Arif Ansari, JMP statistical software from SAS is the ideal platform for a meeting of minds – a stage on which scholars from distinctly different disciplines are offered an interdisciplinary perspective on data analysis and understanding.

“JMP helps me bring three disciplines of students together and then demonstrate to each group how the others experience data mining,” says Ansari. “And it’s all because of JMP’s visualization tools.”

Dr. Ansari is an assistant professor in the University of Southern California Marshall School of Business’ Department of Information and Operations Management. He’s an expert in data mining, business intelligence, data warehousing and intelligent systems and technologies, and teaches courses in applied statistics and data mining. 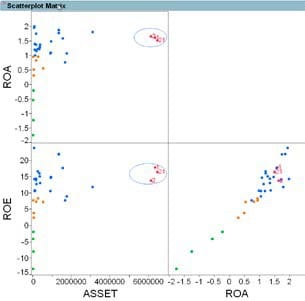 The Scatterplot Matrix compares return on assets (ROA), return on equity (ROE) and assets for Asian banks in a study. Three banks (circled and labeled 1, 2, 21) have high assets, ROA and ROE.

The Scatterplot Matrix compares return on assets (ROA), return on equity (ROE) and assets for Asian banks in a study. Three banks (circled and labeled 1, 2, 21) have high assets, ROA and ROE.

The three disciplines of students come together in a course Ansari teaches called Data Warehousing, Business Intelligence and Data Mining.

Among those disciplines, the largest group is made up of MBA students who, says Ansari, are primarily interested in metrics – percent accuracy, for example – and generally aren’t concerned with the data itself.

“For these students, the visualization JMP offers really opens their minds,” Ansari says. “Often, metrics can be misleading. Two different models with similar metrics can have totally different fits. The JMP profiler has helped me show students how nonlinear models behave and how to select the best model by visualizing the data.”

Computer science students comprise the second discipline. They believe, says Ansari, that “the algorithm is king” and will solve any data mining dilemma.

“After I show them simple examples of how different algorithms fit the same data set, they start understanding the advantages and disadvantages of the algorithms and when they are applicable.

“Most of the computer science students assume the data consists of nice clusters, which is generally not true. Again, JMP’s visualization tools have helped me get my message across.”

And the third group, those with a strong statistical background, tends to focus on hypothesis and significance tests and forget about the overall business objective.

Ansari has used JMP in all of his MBA classes for several years now.

“My initial attractions to JMP were the graphical features and the ease of use,” he says, “and I really liked the speed at which JMP was adding new features.

“I’m a big fan of the profiler; it gives us a lot of insight. We can look at three dimensions at a time, and then we can rotate it and look at all these things from a different point of view. That’s a very powerful tool.”

Bubble plots are another favorite.

“I feel bubble plots really capture our attention. They’re a new type of data mining, in my opinion, that lets you see movement over time, not at different times as displayed in a static plot. You can show how data and results vary as the time varies.”

The rotatable Scatterplot 3D of Asian bank data makes it easy to identify banks that are potential acquisition targets (green markers in lower left corner) and those high performers that stand out from the group (red markers in the upper right).

The rotatable Scatterplot 3D of Asian bank data makes it easy to identify banks that are potential acquisition targets (green markers in lower left corner) and those high performers that stand out from the group (red markers in the upper right).

Ansari also uses SAS® Enterprise Miner™ – for which he sees JMP, in many respects, as a desktop complement.

“They’re both coming from the same company and they’re both extremely powerful,” he says. “They are used in companies which will employ our students, so I teach them both.”

Put to the test

Ansari describes three major research projects in which he and his students have made extensive use of JMP.

The first was an MBA thesis project for AdJack.tv, a website where visitors view commercials in return for being registered in a sweepstakes. One of Ansari’s MBA students convinced the company that it should have visitors comment on the commercials, and that in so doing it could gather information about who they are, what their buying habits are, etc., and that information could then be sold to the site’s advertisers. Thus a great deal of data was generated.

“We then looked at the data and did clustering analysis,” says Ansari. “We used JMP for all the analyses and graphs.

“This research received a lot of praise. The company was very appreciative of what was done, because now the data is meaningful. Now they can monetize it.”

Another project – one that Ansari and a colleague conducted – was done on behalf of the Ethnic Banking Association. The question posed was why some ethnic banks were growing faster than others. Data on the banks was provided by the Federal Reserve.

Ansari and his colleague did clustering analysis to determine where a particular bank stood in relation to its peers. Then, they analyzed the data from three perspectives: bank assets, return on assets and return on equity.

Ansari says that when they presented their results to the bank executives, there were gasps in the room, because the JMP graphics so clearly delineated the disparities among the banks across four meaningful clusters.

“It really gave them perspective about where they stood in relation to their peers. Three banks stood above the rest, and the ones at the bottom were saying, ‘Oh my gosh, I’m a potential acquisition target.’”

Some of the banks then fashioned new business strategies based on the research. The banks at the top completely changed strategies, recognizing that they could perform better still if they ceased identifying themselves as ethnic banks. They would retain elements of their ethnic identity, but market themselves with a more mainstream image.

“We learned a lot of interesting things in this research – and we did it all using JMP.”

A third research project was conducted for a large healthcare provider. While the company had grown rapidly for a time, more recently its growth had been stagnating. Executives were interested in the extent to which individual facility managers might be responsible for the slump and the extent to which they contributed to a facility’s profitability.

The USC team used neural networks with JMP and regression modeling using another software and then compared results, which, Ansari says, matched nicely.

The team devised a scoring system for managers and determined that a number of factors affect a manager’s performance – including the location and size of the facility and how long the manager had been there – and thus the profitability of the facility.

In a nutshell, says Ansari, it’s JMP’s interactive graphics that make it such a valuable teaching tool in his classroom. “JMP gives my students valuable insights rather than relying on pure mathematics. Three dimensions, rotate it – JMP just offers so many insights.

JMP helps me bring three disciplines of students together and then demonstrate to each group how the others experience data mining. And it’s all because of JMP’s visualization tools.