The University of Oregon’s Masters Industrial Internship Program produces industry-ready graduates who can hit the ground running in real-world jobs thanks to their mastery of industry-relevant coursework.

When the Master’s Industrial Internship Program was launched at the University of Oregon (UO) in 1998, there were few programs designed specifically to facilitate students’ transition from academia to employment with applied science companies.

“There was an unmet need in industry for master's level scientists,” explains Stacey York, PhD, Director of the Master’s Industrial Internship Program. The university has long maintained robust corporate partnerships and it was by listening directly to voices from industry that administrators realized there was a growing market for “students who had sector-specific understanding but also an interest in gaining hands-on experience with the type of work being done [in the industrial setting],” York says.

Over the past two decades, the program has developed further in tandem with the evolution of the job market. “The fields of chemistry and physics are really broad,” notes York. That’s why, in order to meet the demands of the industry, the faculty began to discuss which sub-fields of chemistry or physics would help make UO graduates most employable. "Three different tracks are currently offered with others on the horizon; the photovoltaic and semiconductor device processing track [which was first founded in 1998], polymer science and most recently optics,” York says. “We build [our curriculum] around an industry sector -that has significant career opportunities.”

“In the Master’s Industrial Internship Program, we really emphasize experience,” says manager of the photovoltaic and semiconductor program, Fuding Lin, PhD. “Students get that experience by going through the process together with very close guidance from us. Before joining the program, students don't necessarily know how to do the research and development work… or have the skill and confidence to work independently. Our courses allow them to acquire a more complete skillset directly relevant to what they will need in their careers.” 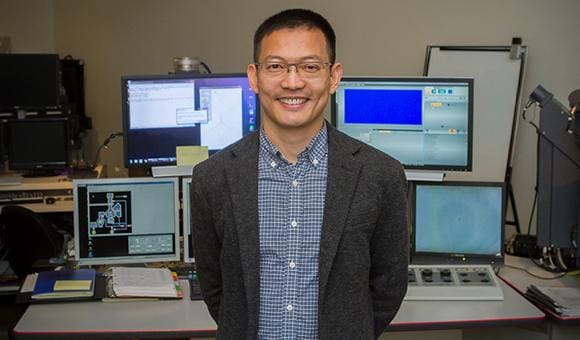 “Before joining the program, students don't necessarily know how to do the research and development work… or have the skill and confidence to work independently. Our courses allow them to acquire a more complete skillset directly relevant to what they will need in their careers.”

Work-ready graduates must be proficient in DOE and JMP

Throughout the evolution of the Master’s Industrial Internship Program, York, Lin and their colleagues looked to the university’s industry partners for feedback on the curriculum: Was it relevant? Were new UO graduates entering the workforce prepared to make an impact? “It was through their feedback, and through my assessment of early career positions [around two years ago], that we decided that a design of experiments (DOE) course using an industry standard software such as JMP was going to give our students an edge,” York says. “They’re only here for a finite amount of time – and we have a finite amount of resources to work with. So [adding a DOE course] was also a strategic decision: what would have the largest return on investment in terms of students' marketability?”

A key part of the program’s experiential philosophy is the belief that, while they are at UO, students should preferably work with the same tools they will later encounter in the industry. So when York and Lin began investigating software needs, they again consulted the program’s corporate partners. “Direct feedback from partners showed that JMP was the software they were using,” says York. “When I try to understand what an early career would look like for one of our graduates – what the semiconductor scientist or polymer scientist or optical engineer needs – you can clearly see a pattern. It typically shows up in the preferred qualifications: JMP-based DOE experience.” “It was through [industry] feedback, and through my assessment of early career positions [around two years ago], that we decided that a design of experiments (DOE) course using an industry standard software such as JMP was going to give our students an edge.”

Lin now teaches the program’s DOE elective, a course that has burgeoned in popularity with a majority of students enrolling each year. But before they get to the statistics, Lin says, students receive a crash course in JMP. “I project my screen whenever we’re using JMP in class. That way, I can show them how to do the [exercises assigned to them] and they can follow in real-time with the JMP software installed on their laptop. To make learning statistics more fun, we play with dice and use the data to demonstrate important concepts such as central limit theorem, confidence interval and hypothesis testing. Once they have the basic statistics and principles of DOE down, we then move on to class projects that most people can easily relate to.” One such project involves a series of experiments related to coffee; how brewing parameters like water temperature, brewing time and the amount of sugar affect the taste. The coffee project also teaches students how to deal with subjective response data where individual preference plays an important role. By the end of the course, though, Lin pulls more advanced examples from industry and gives students a project to optimize a chemical vapor deposition processes. 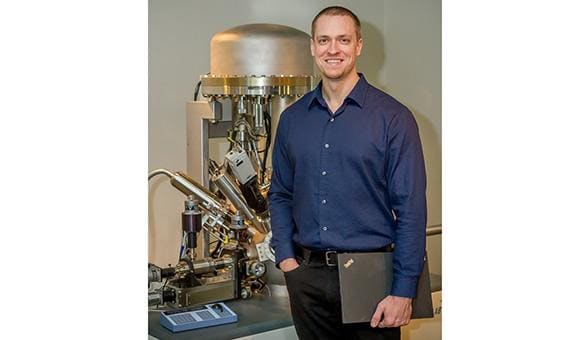 “Working with x-ray tomography, we could actually use JMP’s statistical function and obtain a distribution of the void space in high explosives that would previously have taken [my colleagues] three or four days to process. But it took me about a half an hour with JMP. LANL management was really happy with that result.”

Trevor Shear is an alumnus of the Master’s Industrial Internship Program, and former intern with the Los Alamos National Laboratory (LANL) in New Mexico. After hearing from industry recruiters that DOE would be an important skillset to master while in graduate school, he enrolled in Lin’s course and learned to use JMP. “I never took stats as an undergrad because I wasn’t required to. But [once I got to UO] my mindset was that I wanted to make myself as valuable as I possibly could to an employer… I wanted to make myself too valuable to lose,” Shear recalls.

After previewing the projects he would be working on at LANL, Shear was convinced his experience using JMP for DOE would be beneficial. “There were so many variables with so many levels [that could be adjusted],” Shear explains. “You could spend a whole career trying to figure this stuff out and maybe still not get the answer that you wanted.”

Upon beginning his internship at LANL, however, Shear learned that his new colleagues were using a different software package than the one he’d become familiar with at UO. But after reviewing LANL scientists’ experimental designs, he quickly pinpointed an opportunity to reduce both cost and experimentation time. “I prepared a DOE in JMP and walked them through what the work could be like,” he says. To illustrate, he pulled up the coffee taste experiment data file from Lin’s course. “The coffee project had good statistical data I could show them. Just going through that in JMP really sold them. It is not just about the analysis, but also the graphical representation of your data. Other software might be able to do this, but it takes them three or four hours where the same thing would take literally one click of a button in JMP. That made the group excited.”

Shear’s use of DOE was so effective that JMP was rolled out across his working group at LANL, and eventually they even upgraded to JMP Pro. “Working with x-ray tomography,” Shear explains, “we could actually use JMP’s statistical function and obtain a distribution of the void space in high explosives that would previously have taken [my colleagues] three or four days to process. But it took me about a half an hour with JMP. LANL management was really happy with that result.”

Economic and academic indicators show the program has widespread impact

There is no question that the Master’s Industrial Internship Program has been a success; 98 percent of those students enrolled undertake successful industry or government lab internships, York says. “In the past three years we've worked with 75 plus organizations, from start-ups to Fortune 50 companies to national labs. And the average internship salary this past year was $54,800.” Since 2012, she says, students in the program have been funded in the magnitude of $11 million set forth by both industry and government labs. “This metric alone shows the commitment outside of academia to our educational model.” And then there is the success of program graduates. York says 90 percent of participants are employed within three months of receiving their master's.

In 2017, the Master’s Industrial Internship Program became part of the new Phil and Penny Knight Campus for Accelerating Scientific Impact, a $1 billion initiative announced in 2016, made possible by a $500 million gift from Nike co-founder Phil Knight and his wife, Penny. “It’s a pretty monumental time to be at UO,” says York. "The Knight Campus is designed to accelerate scientific impact. And our [Master’s Industrial Internship] program has been at the heart of that effort all along; using an experiential educational model to get students really prepared to make an impact.”