“Pharmacovigilance.” Not a word you hear every day. But its practice plays a critical role in the everyday lives of most everyone. The World Health Organization defines “pharmacovigilance” as “the science and activities relating to the detection, assessment, understanding and prevention of adverse effects” of pharmaceutical products – those adverse effects ranging from mild nausea to a heart attack.

Peter Mroz is a statistical programmer for Janssen Research & Development and a longtime user of JMP® statistical discovery software from SAS. Janssen is a subsidiary of Johnson & Johnson – the New Jersey-based multinational manufacturer of medical devices, pharmaceuticals and consumer products – and Mroz is employed in its Global Medical Safety department. He supports the development and implementation of analytic tools that allow surveillance physicians to more effectively and efficiency identify and evaluate adverse effects.

Mroz helped develop a package called Signal Management for Adverse Events in Real Time, or SMART, of which JMP is a key component. SMART, Mroz says, serves as “a giant magnifying glass,” closely scrutinizing the thousands of potential adverse events of all drugs under surveillance. It scours for statistical signals – information on a possible relationship between an adverse event and a drug. A signal is preliminary in nature; the situation may change substantially over time as more information is gathered. SMART investigates. In short, it provides transparent access to safety data that would otherwise be extremely laborious to uncover.

A critical step in pharmacovigilance is the inspection and analysis of a patient case narrative. A narrative might read something like this:

Joe B. had liver cancer, which was diagnosed in June 1998. He previously received treatment with Brand Z drug. His medical history included cardiac arrhythmia, myocardial infarction, deep vein thrombosis, hypercholesterolemia, acute renal failure and hypertension. On April 30, 2001 (Cycle 1, Day 33; 15 days after completing Cycle 1 therapy), he was admitted to the hospital for treatment of acute renal insufficiency ….

Without SMART, surveillance physicians would have to pore through perhaps tens of thousands of such narratives to get at those relevant to their particular investigation. “SMART says, ‘Here are these 20 that I think you should pay attention to,’” Mroz explains. “It’s click, click, click, and you’re there. SMART finds the needle in the haystack.”

JMP makes it all very easy. First, it provides the user interface, which accesses an Oracle database. The surveillance physicians click on a row in the dashboard and are given a detailed screen on the record of interest. They can then drill down into each case. “They can explore narratives,” Mroz says, “they can do a trend chart; they can do quite a bit.”

JMP is well suited for this task, Mroz says, because “it has all the tools you need” – including a rich selection of graphical options. Mroz calls Graph Builder “one of my absolute favorite tools. It does bar charts, line charts, heat maps … You can develop a graph and very easily tweak it, and tweak it again, to get it precisely the way you want it to look. Then you click on the little red triangle, and there’s all the JSL code. JMP has created the whole program for me.”

For example, Mroz uses Graph Builder for SMART trends charts. He built a display with a tabbed interface, the first of which shows a general trend: variations in the reporting of events over time. The second tab then breaks everything out by country. “Now it’s a stacked bar chart,” Mroz explains, “and each color in the stack is a different country.” He can then click on the next tab to gain information on the seriousness of an adverse effect, gender of the patient or any number of other variables.

Mroz describes a practical application of the STACK command in JMP: A colleague came to him with an Excel spreadsheet that he wanted to collapse from a hundred or so columns down to three. “I used the stack command and in 10 minutes was able to say: ‘Here you go. All done.’ He was impressed. And so was I. JMP is just so powerful.”

The one practical downside of the successful implementation of the SMART tool and related analysis packages was the ever-expanding user base. Since JMP is a desktop tool, maintenance, support and upgrades were getting more and more difficult to manage. Mroz therefore resorted to using a Citrix deployment of JMP, which allows much greater central control and user management. 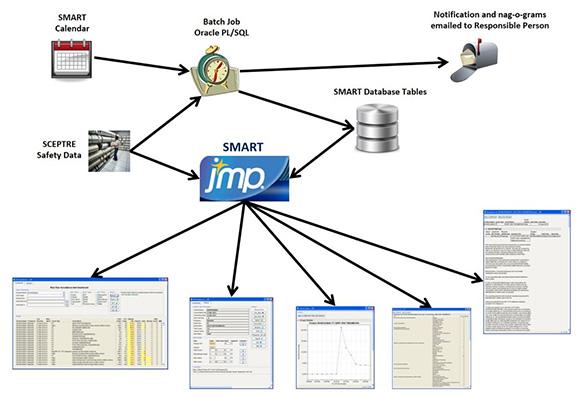 Physicians as designers: ‘They have all these great ideas’

Mroz meets with the Janssen surveillance physician team once a week or so to share thoughts on, and discuss potential improvements to, the SMART system. “I was talking with one of them recently, and I said, ‘Would you have thought three years ago that you would be doing screen designs?’ I mean, she’s a doctor. Screen designs? And she said, ‘Not in a million years.’ But now we have meetings in which we argue about screen designs. And they love it; they have all these great ideas.

“Once you see a graphic, and understand it, you can now say, ‘What if we did this?’ They’re quick with picking it up and coming up with ideas. They’re a big part of the whole design process.”

Mroz says he’s impressed by the improvements to JMP with each new version. “They keep adding more bells and whistles.” A recent addition that particularly intrigues him: Text Explorer. “It’s early days yet, but we want to use Text Explorer to more thoroughly analyze narratives. There’s a lot of information there that I think we can get at with it.” An example is a situation in which the narrative references an adverse event that wasn’t captured in a database field.

“The number of features that the JMP guys add each time – maybe it’s not exponential, but it grows and grows – and they’re just so open to feedback. I can pick up the phone and call; they’re very willing to listen to suggestions.” Mroz is also a regular in JMP discussion forums, learning new tricks from users in other fields.

Being a programmer, he has plenty of ideas to share. And of course, he takes full advantage of JMP Scripting Language. “JMP comes with so many things that are built in that are very nice to use,” he says, “and if it doesn’t have what I need, I can easily write a program for it. JSL makes JMP extremely extensible.”

Design it well, and they will come

“SMART has met all of our objectives,” Mroz attests. Surveillance physicians are able to proactively explore potential safety risks, processes are streamlined, documentation is more efficiently managed, and reports are more easily generated. That’s all good news for consumers.

A key element of that success is that SMART was designed with its users in mind. Listen to your users, Mroz urges. Then listen some more. Strive to give them a tool that allows them to explore on their own, regardless of statistical expertise. JMP software’s accessibility and flexibility facilitate that.

(Another Mroz tip: Coming up with a catchy name helps too. “SMART” is much better than, say, “IRTSS.”)

“JMP is like Excel on statistical steroids,” Mroz concludes. “There’s so much you can do with it without having to write a program – and then you can easily write one if you want to. You can go very far with JMP.”

NOTE: The opinions expressed here are those of the authors and not necessarily those of the company that employs them.