Once upon a time, Animal Humane Society used predictive modeling to place pets into loving homes

Some animals are surrendered by owners who are moving, aging, or can simply no longer care for their pet. Some animals are rescued, recovered from breeding facilities or another inhumane situation. Still other animals arrive after being lost or abandoned. All animals at the Animal Humane Society receive compassionate care and a new lease on life.

This is the story of the Animal Humane Society and how JMP is helping it create a better world for animals.

In 2007, five animal organizations in Minnesota joined hands to become the Animal Humane Society (AHS). And therein lies both the opportunity and the problem. While the merger established a far-reaching organization dedicated to responsible, compassionate animal care, merging their 30 years of records was challenging.

The combined file was enormous and included information on approximately 300,000 people. But the data was of different quality and age. There were incomplete records and duplicate listings. “We had nine major databases and 32 different data sources. And none of them talked to each other,” said Chris Prather, Data Analytics and Strategy Manager at AHS. “We knew we had a wealth of data and we believed it held answers. What we lacked was the tool and know-how to get the information to work as one.”

Meanwhile, the new organization was thriving. Employees were accepting and placing as many as 25,000 animals per year. They were managing a standalone for-profit business called Now Boarding, a kennel located near the Minneapolis-St. Paul International Airport. They were holding three major fundraising events a year. Yet they were unable to efficiently extract answers from their siloed data. While they could segment stakeholders into broad categories such as donors, adopters, volunteers and advocates, they were unable to quickly answer the question, “Who overlaps?”

To be strategic, AHS leaders realized they would have to address this fundamental issue. They were sure that if they could compile, organize and statistically study the data, not only would they be able to identify stakeholder behaviors and motivations, but they could also make data-driven decisions about marketing, events and programs. It was a tough, analytical problem they knew they must solve, but they didn’t have the right tool.

In early 2014, AHS began collaborating with Rob Reul, Managing Director of Isometric Solutions, a market research firm specializing in customer analytics. Reul has used JMP since 1990 and describes it as his “go-to tool.” He compiled and transferred the AHS data silos into a comprehensive JMP file. Almost immediately, stakeholder patterns began to emerge.

“The very first thing Rob did [with JMP] was give us the lifetime value of a donor based on their engagement,” Prather said. “If someone makes a gift, they have a $466 lifetime value to us. But if they also adopt, that doubles. And if they board or train, it triples. And we couldn’t see that before. Ever.”

Another turning point came as the result of deep stakeholder analysis. People become AHS stakeholders in a variety of ways. Some are donors, others volunteer their time. Some people adopt pets from AHS and still others become advocates, speaking out at the state capitol when issues affecting the organization’s mission are debated on the legislative floor.

Using JMP to analyze the data, AHS can cross all donor categories and look holistically at individual records. For example, at the time of a new pet adoption, AHS can determine if a family has ever adopted, boarded or trained an animal with the agency before. They can see if a child has attended an AHS summer camp or if a family member has volunteered or participated in a fundraising event.

With this 360-degree view, AHS can personalize communication with the family, strengthening the relationship between stakeholder and organization, and strategically driving engagement to the next level.

A third turning point came when an older gentleman arrived at AHS with a check. His sister had died and, in her will, asked him to sell her house and donate the proceeds to AHS. Although this was not the first time AHS had received a bequest, it was the first such gift since AHS adopted JMP. Now, as part of a planned giving project, AHS is building a JMP profile of those who have created a legacy that includes the organization. They can now identify possible planned giving prospects and tailor communications with this group. It’s smart, strategic and helps ensure a healthy future for the organization.

As these discoveries were unfolding, AHS executives turned their attention to fundraising.

Who walks the walk?

They wear pink feathered boas, cowboy hats, sweaters, scarves, wigs, tutus, tie dye and tartan – and that’s just the dogs. Each spring, pets and their owners come from miles around to join the AHS Walk for Animals. It’s an easy 2.5-mile walk and it’s the society’s primary fundraising event each year. Seven years ago, the walk raised more than $1 million, but each year that number drops. Why? With help from JMP, AHS is now able to answer – and address – that question.

Until recently, organizers had only anecdotal information about the walk. They knew pet owners loved the event; they believed they had a loyal following. In 2014, AHS conducted a brief survey among participants. An analytical look at the results broadened the agency’s perspective.

Retention was the first big surprise. AHS learned by analyzing participation trends that planners needed to replace more than a third of the walkers every year. The ease of building models in JMP allowed Reul to create a profile of walker retention.

“I literally misted up when I saw Rob take something that would have taken us weeks to do in our system of exports and reports and [with JMP] he could just do it with a click. It blew me away,” Prather says. “Now we are making decisions, changing our marketing for the walk. We’re just starting to have those conversations, and we’re coming up with lots of ideas.” 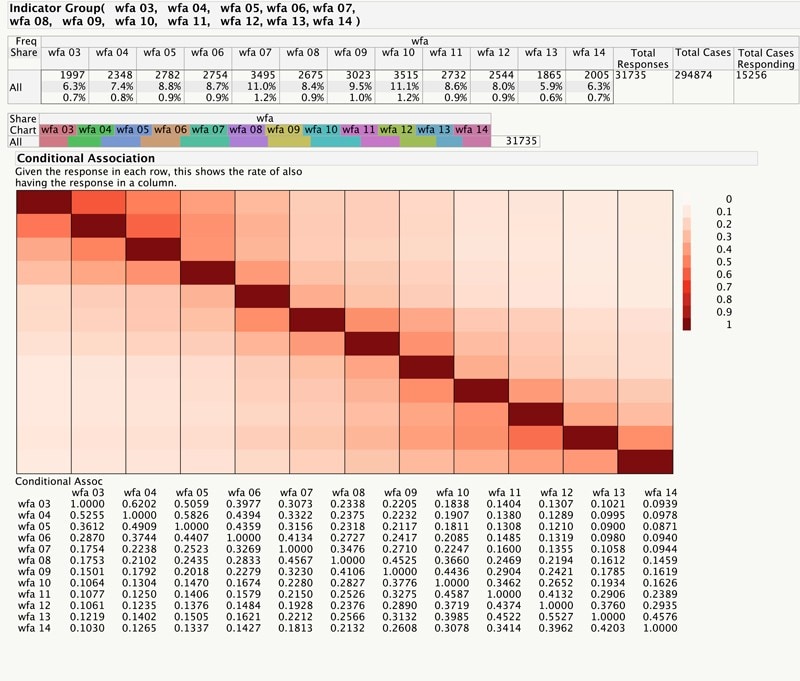 This graph demonstrates the probability that AHS Walk for Animals participants also would take part the following year.

For example, it shows a 41 percent probability that people who walked in 2011 would return in 2012.

This graph demonstrates the probability that AHS Walk for Animals participants also would take part the following year.

For example, it shows a 41 percent probability that people who walked in 2011 would return in 2012.

With JMP, AHS was able to construct profiles of the best fundraisers, isolate key reasons they participate and determine who will walk again. From this, organizers can predict not only who the high fundraisers will be next year, they can also project how much money will be raised.

To understand more fully who participates in the walk, AHS applied a GIS component to their analysis. The resulting map revealed there were participants from all points north, south and west. But from the east? Not so much. The Mississippi River proved to be the great divide. AHS President and CEO Janelle Dixon explains: “Several years ago, there were two walks each year – one in Minneapolis and another in St. Paul. After the merger, we united our walks, holding one large event in Minneapolis. Looking at this map, we realized no one in St. Paul was ‘crossing the river’ to be part of the walk.” As early as 2016, the walk may once more extend to both sides of the river.

“JMP helped us see we needed to do things differently,” Dixon says. “Now we can be much more precise in who we talk to and in what we say. We can thank people for their participation and encourage them to join us again.”

Their current JMP file contains almost a gigabyte of data. It is 420 columns wide, and 300,000 rows deep. Says Reul: “What we did with JMP I can’t imagine being able to do with any other program, and we’re really just getting started.”

What difference does it make?

In less than a year, JMP has helped AHS employees learn more about their constituents – who they are and how they engage with the organization – than in the previous six years. For the first time, AHS can be intentional and strategic in the marketplace.

“The numbers tell our story. But what you must understand is that when we see numbers in JMP, they aren’t ‘just’ numbers,” Dixon explains. “They represent the number of lives we can impact. These ‘numbers’ are animals we can care for and save.

“JMP helps us work more effectively and more efficiently,” she adds. “It’s making it possible for us to do what we set out to do.”

AHS by the numbers

What we did with JMP, I can’t imagine
being able to do with any other program.