The race to zero

Geoff Beatham didn’t need to be convinced of the power of JMP statistical software from SAS – not after some 20 years of employing it as an indispensible tool in his work as a quality-improvement engineer. But a recent project hammered that reality home and made new believers among his colleagues.

Beatham is Quality Director for Kodak’s Film Capture business, which includes the motion picture business as well as consumer and commercial products. He and his team discovered that a very low level of contamination was being generated in the base-roll manufacturing process: microscopic black particles, which would then get coated over in the next stage and result in particles in the final product.

Beatham is responsible for driving zero-defect manufacturing across the organization. Black particles are among his nemeses. Armed with JMP, he and his colleagues set out to eradicate them. 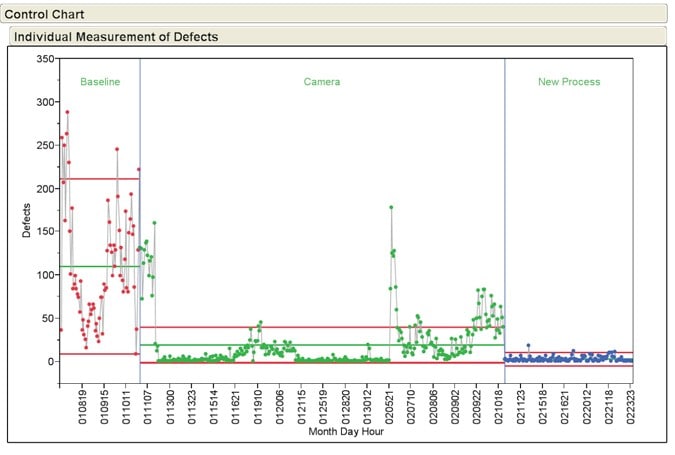 Kodak visualizes defect data over time as shown in this Control Chart. The data displayed here were generated in three phases, without use of a camera (Baseline), using a camera (Camera) and then after implementation of process changes (New Process). 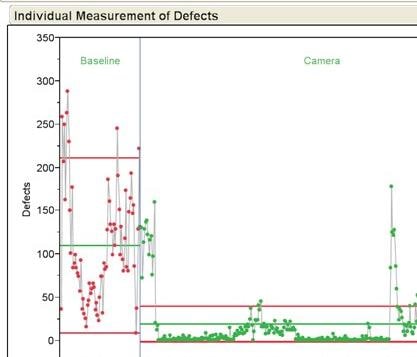 Kodak visualizes defect data over time as shown in this Control Chart. The data displayed here were generated in three phases, without use of a camera (Baseline), using a camera (Camera) and then after implementation of process changes (New Process).

“JMP has been significant in allowing us to unravel the key facts from all the noise in our complex manufacturing process,” Beatham says.

“We suspected that the problem was occurring in our base coating operation, on the substrate the product is manufactured on,” Beatham says. “It was these microscopic black particles that were then being coated over when we applied the photosensitive layers. When customers processed the film, they occasionally ended up with those same particles.”

But the precise origin was elusive. The size and frequency of the particles were such that they fell beneath the detection capabilities of the inline film-inspection process. Compounding the difficulties in detecting the problem was that it was occurring only intermittently.

“During the manufacturing process, we were blind to the source of the problem,” Beatham says. “We were finding one occurrence approximately every 10 million linear feet of product. It was a very difficult problem to get our hands around.”

Past efforts to make improvements had yielded little gain, says Rob Bettin, the Kodak Manufacturing Engineer in charge of this project. 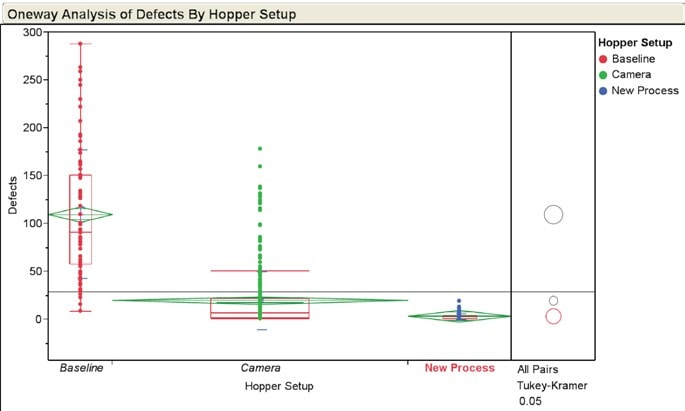 This Oneway Analysis shows that the New Process settings made a statistically significant improvement, as indicated by the Tukey-Kramer statistic. 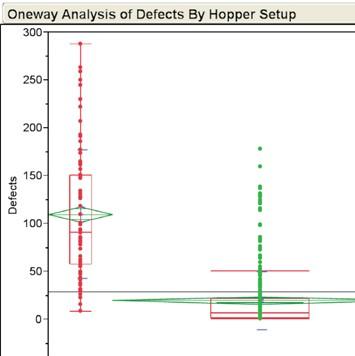 This Oneway Analysis shows that the New Process settings made a statistically significant improvement, as indicated by the Tukey-Kramer statistic.

“One of the problems was that we didn’t have a good feedback loop,” Bettin says. “Our only recourse was to get customer feedback.”

So they developed a camera system to look at the edge of the film, taking three images a second on each side of the product.

“That’s tens of thousands of images an hour,” Bettin says, “and this was where JMP was particularly useful.”

JMP allowed Bettin to analyze 20 million records, which revealed non-uniformity on the edge of the film. He then used a JMP phase control chart to examine changes he made at given points in the process.

“Then I could do a Tukey-Kramer analysis,” he says, “and was able to show when we made improvements. We were able to continuously make small improvements and then eventually show some very significant differences.”

The team made process upgrades to the coating technology, and enhanced edge controls resulted in improved process performance. In addition, material and formulation changes improved the consistency of the materials used in the substrate layer.

The Kodak team soon began seeing only one occurrence of the problem every 300 million linear feet of film – a 30-fold improvement. And in 12 months, there have been no occurrences at all.

“So we really are at our goal of running this at zero-defect performance,” Beatham says. 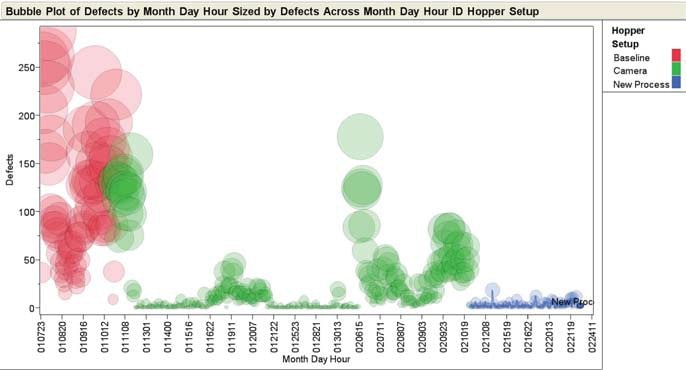 This JMP Bubble Plot of defects over time is colored by the three phases: Baseline, Camera and New Process settings.

This JMP Bubble Plot of defects over time is colored by the three phases: Baseline, Camera and New Process settings.

JMP Product Manager Lou Valente assisted the Kodak team in this project and was plenty impressed.

“To be part of a project that delivered a defect reduction to only one defect in 300 million linear feet of motion picture film – which is enough film to wrap around the Earth twice – is really very rewarding. And it makes me better appreciate the power of utilizing data mining and visualization techniques in a manufacturing setting,” Valente says.

“We have very extensive processcontrol data sets across our organization,” Beatham says. “JMP gives us the ability to look at that data and look for correlations across it. I’m not aware of any other process tool that would allow us to get the degree of statistical analysis that we can get with JMP across those large data sets.

“From a statistical-analysis point of view, it’s really the tool of choice for us – and I think it’s the only tool out there that gives us the flexibility to do what we need to do.”

JMP is also powerful as a communication tool.

“It is key for people like Rob to be able to present his data in a way that is clearly visual to the management groups, as they’re reviewing projects and trying to understand why we need to spend money to review roadblocks,” he says. “It’s very easy to show the impacts of what the data is showing in JMP.”

Bettin agrees: “Once I was able to demonstrate what was going on, having looked at millions of records – which we’d never been able to do very effectively before, just looking at printouts – I was able to convince management that, yes, we can do better. And then we were able to find those little things that allowed us to improve.”

After senior managers saw the data in JMP visualizations, they easily understood the need for remedies with almost no hesitation, Beatham confirms.

Bettin says that he’d never used JMP before this project and that few others in his group had either. The group created a designed experiment and had a design steering team.

“Lou helped us get it all going. It didn’t take much once we got started,” he says.

Bettin says he’s now using JMP quite a bit, for example, for time series analysis. “Honestly,” he says, “I don’t think I’m using a quarter of the power of JMP yet.”

Beatham says that Kodak will be taking another “leap forward” in incorporating JMP throughout the company by assembling a group of “superusers” to serve as high-level experts within their individual areas.

“JMP is a key tool for our technical and engineering experts as we continue to focus on zero-defect manufacturing,” he says. “We had just stellar success on this project. It really has been exciting, and it’s nice to be able to share it.”

JMP has been significant in allowing us to unravel the key facts from all the noise in our complex manufacturing process.