The Beijing Aquarium developed a 3-in-1 management solution that decreased energy use, improved the visitor experience and preserved endangered species

Unlike their natural seaside counterparts, inland aquariums rely on advanced technology for life support and water treatment in order to sustain the sensitive aquatic conditions that will enable marine species to thrive even thousands of miles from the ocean. The Beijing Aquarium is a case in point. What was, at the time of its construction in 1999, the world’s largest inland marine facility, the Beijing Aquarium spans nearly 1.3 million square feet. With so large an aquarium at such great a distance to the sea’s natural systems, water management presents some especially tough challenges.

Little is known, however, about causality in artificial aquatic life support systems. And there are few existing guidelines for managers tasked with optimizing water quality conditions in an aquarium’s manufactured ecosystems. With endangered species’ survival in question, though, stakes are high.

The Beijing Aquarium is home to a pod of rare beluga whales. The beluga whale, according to the International Union for the Conservation of Nature, is considered “near threatened” around the globe, though in Canada, shrinking population size in recent years has caused the government to reclassify belugas as endangered. Beluga whales are indigenous to the frigid waters of the Arctic Ocean where their distinctive all-white phenotype, stocky body and heightened echolocation skills help them to survive extreme conditions.

While the Beijing Aquarium’s belugas need not fear the natural threats of the wild – polar bears and killer whales are among their chief predators – their survival in captivity depends on the careful monitoring and management of their human stewards. Conditions in the beluga tanks should mirror that of the natural environment as closely as possible.

There is, however, just one hitch: high turbidity – a quality linked to animal activity – means low visibility. And low visibility means aquarium visitors won’t be able to see the belugas. Moreover, maintaining constant high-visibility conditions is expensive and requires high energy consumption. Was there a solution to satisfy these seemingly competing interests? That task fell to the Beijing Aquarium’s Lei Wang and his team of water quality engineers. And they turned to JMP.

“Before we had JMP,” Wang recalls, “we didn’t have a good way to make accurate predictions. JMP has changed our perspective as to how we can better understand and anticipate changes and fluctuations in water quality.”

Wang and his team ran a series of tests in JMP in which the output variable was turbidity and the input variables were time of day and circulation rate. They asked: What is the relationship between each factor and the output response? “Turbidity is linked to two factors,” says Wang. “First is the recirculation rate of the water. Second is time of day, which is closely related to whales’ biological clocks.

When the Beijing Aquarium deployed Wang’s proposed strategy last year, administrators found that the results were very positive: A brighter display during the day provided a better customer experience, while energy consumption actually decreased by two-thirds. The aquarium now uses only one-third the amount of energy they were using before, with savings of around $5,000 a month for the beluga whale tank alone – and that is one of their smaller tanks.

From trial and error to data-driven decision making

With the success of their data-driven management strategy for the beluga whale tank, Wang and his team put JMP to work investigating other areas in which the aquarium could improve its processes. Until recently, the aquarium made ecosystem management decisions based on precedent, past experiences and trial-and-error rather than on data. And the outcomes were not optimal.

What the aquarium needed was to systematize the decision-making process – observe results over time and develop standard guidelines. But with many workers having little to no technical training, the means by which the organization did this had to be accessible, says Wang. “Even after just a year and a half of using JMP, we made several meaningful discoveries with our data. And we learned that JMP was easy to use – even for people who don’t know much about statistics.”

In addition to determining correlations between water quality measures to balance the manufactured ecosystem, Wang and his team also started looking into the relationship between the aquarium’s operation parameters and water quality measurements. They now generate a weekly report in JMP that serves as a visual representation of fluctuations in water quality over time. “Before we had JMP, we had to rely on a combination of Excel, SPSS and Orange to create these reports,” Wang says. “But now JMP is the only software package we need.”

Before the aquarium started using JMP, it would take Wang’s entire six-person team a full week to produce the annual report. With JMP, it only takes one person two days. “That’s a huge time savings,” says Wang. Moreover, “JMP provides an intuitive, interactive way to view outputs. The aquarium’s high-level management doesn’t have to possess much statistical knowledge in order to understand the implications of our work.”

In the future, the aquarium plans to coordinate between departments so that all can collaborate on their efforts to understand how aquatic ecosystems function as a whole and, Wang hopes, use data to manage those systems more efficiently. 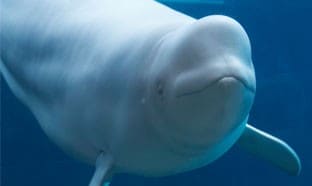 Before we had JMP, we didn’t have a good way to make accurate predictions. JMP has changed our perspective as to how we can better anticipate changes and fluctuations in water quality in the future